The 1.1(1j) & 11.1(1j) release of ACI introduced support for transit routing. Prior to this, the ACI fabric acted as a ‘stub’ routing domain; that is, it was not previously possible to advertise routing information from one routing domain to another through the fabric. I covered L3 Outsides in part 9 of this series where I discussed how to configure a connection to a single routed domain. In this post, we’ll look at a scenario where the fabric is configured with two L3 Outsides and how to advertise routes from one to another. Here is the setup I’m using: 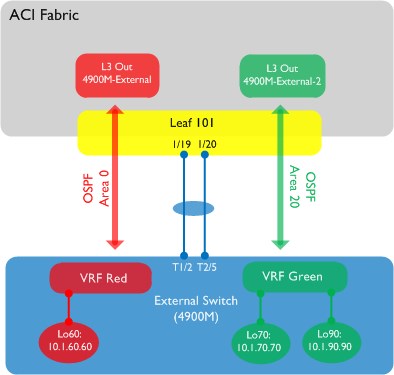 At this point, my OSPF adjacencies are formed and my ACI fabric is receiving routing information from both VRFs on the 4900M, as can be seen in the following output (taken from the ‘Fabric’, ‘Inventory’ tab and then under the specific leaf node, under the Protocols and then OSPF section):

You can see from this output that the fabric is receiving all of the routes for the loopback addresses configured under the Red and Green VRFs on the 4900M. Let’s now take a look at the routing table for the Red VRF on the 4900M:

It’s clear from the above output that the Red VRF is not receiving information about either the 10.1.70.0 or 10.1.90.0 prefixes from the Green VRF - in other words, the ACI fabric is not currently re-advertising routes that it has received from one L3 Outside to the other.

Let’s say I now want to advertise the prefixes from the Green VRF (10.1.70.0/24 and 10.1.90.0/24) into the Red VRF - how do I enable that? The main point of configuration for transit routing is found under ‘External Networks’ under the L3 / Routed Outside configuration. The key here is the Subnets configuration - in previous versions of ACI, this has been used only to define the external EPG for policy control between inside and outside networks. Now however, the subnets configuration is used to also control transit routing in addition to policy control. Here are the options and what they are used for:

If I add the 10.1.90.0/24 prefix to my subnets list, that transit route will also be advertised from the fabric to the Red VRF.

You might now be wondering how you would handle a large list of transit routes; would they all need to be individually entered into the subnets list? No - you can use the Aggregate Export option. This option is currently only available when “0.0.0.0/0” is used as the subnet; essentially, this option tells the fabric to advertise all transit routes. Checking the ‘aggregate’ option is important here - if you simply enter “0.0.0.0/0” as an export route control subnet without the aggregate option, the fabric will try and advertise the 0.0.0.0/0 route only. In my example, I’ve now removed the individual subnet and entered 0.0.0.0/0 with the aggregate option:

I now see both my subnets advertised to the Red VRF: 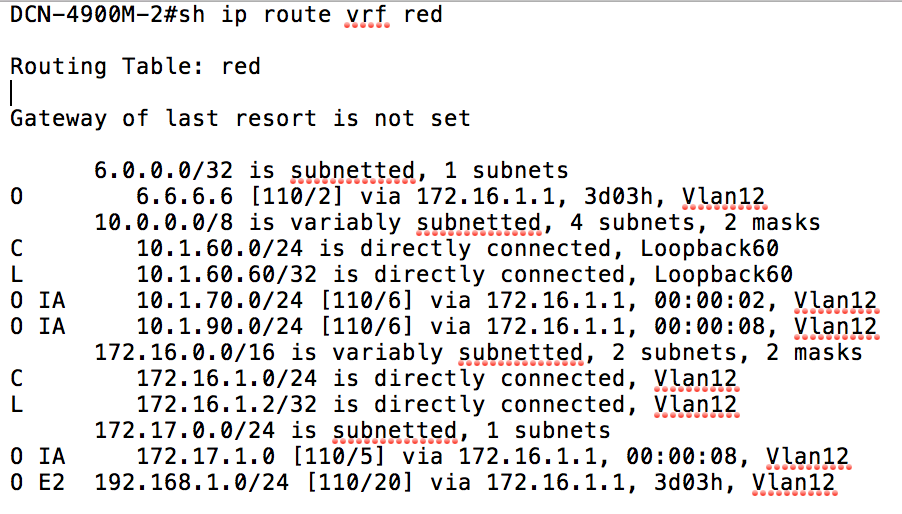 I would then need to provide / consume contracts between these networks for traffic to flow. In the above example, I could have just created a single 0.0.0.0/0 subnet on each side and marked it with export route control, aggregate export and security import options - that would effectively allow all routes and all destinations to communicate with each other (assuming contracts).