In the last post, I covered the basics of EC2, including how instances are billed, which components make up an instance and then how to create and connect to your instance. In this post, we’re going to take a look at some of the more advanced aspects of EC2 - topics such as Auto Scaling, using Systems Manager to more effectively manage your instances and how to gather information about your instances using the built in metadata function.

The basic idea behind Auto Scaling is that the AWS platform will attempt to keep the number of provisioned instances at a “desired” level. If you specify that your desired number of instances is five, then EC2 will add instances if necessary to meet that requirement. So if one out of the five instances should fail, the platform will automatically add another instance to bring the total number back up to five.

Once you have your Launch Template / Configuration, you can go on to create an Auto Scaling Group. This allows you to specify parameters such as how many instances are desired, which specific VPC should be used for the deployment and any scaling policies and notifications you may wish to set up. A scaling policy might state that you want to increase the amount of EC2 instances whenever a specific condition is met (such as CPU utilisation hitting a certain percentage). The AWS platform will monitor this condition inside your Auto Scaling group and then attempt to increase the number of instances once this condition has been met. This screenshot shows a simple scaling policy that will try and add additional instances once the CPU utilisation exceeds 50%:

Next up, let’s take a look at what EC2 Systems Manager has to offer. Systems Manager was introduced towards the end of 2017 - it isn’t actually one feature, but more a collection of features that are designed to simplify the management of and provide greater insight and visibility into your cloud environment. One of my favourite features of Systems Manager is the ability to group AWS resources together using the Resource Groups feature.

What is a resource in AWS? A resource is pretty much anything you can work with, such as an EC2 instance, an S3 bucket, a VPC and so on. As your environment grows, it’s likely that the number of resources that you are using will grow over time. Without a way to organise these resources, things may start to get a little confusing and difficult to manage.

OK, that’s easy enough to understand, but how do we use tags to group our resources together into resource groups? Well let’s say I have an application called “App10”, which uses a number of EC2 instances. I’d like to manage those instances together if possible, so I might apply tags to all of the EC2 instances that are used for the “App10” app as follows:

Note that I also have one other instance that is used for a completely separate app (“App20”), but I don’t want to include that in the group and so have given it a different tag.

Now, I click on ‘Resource Groups’ at the top of the AWS console - I create a new group and then use a resource type of “AWS::EC2::Instance” and a tag of “App: App20”, as shown in the following screen shot: 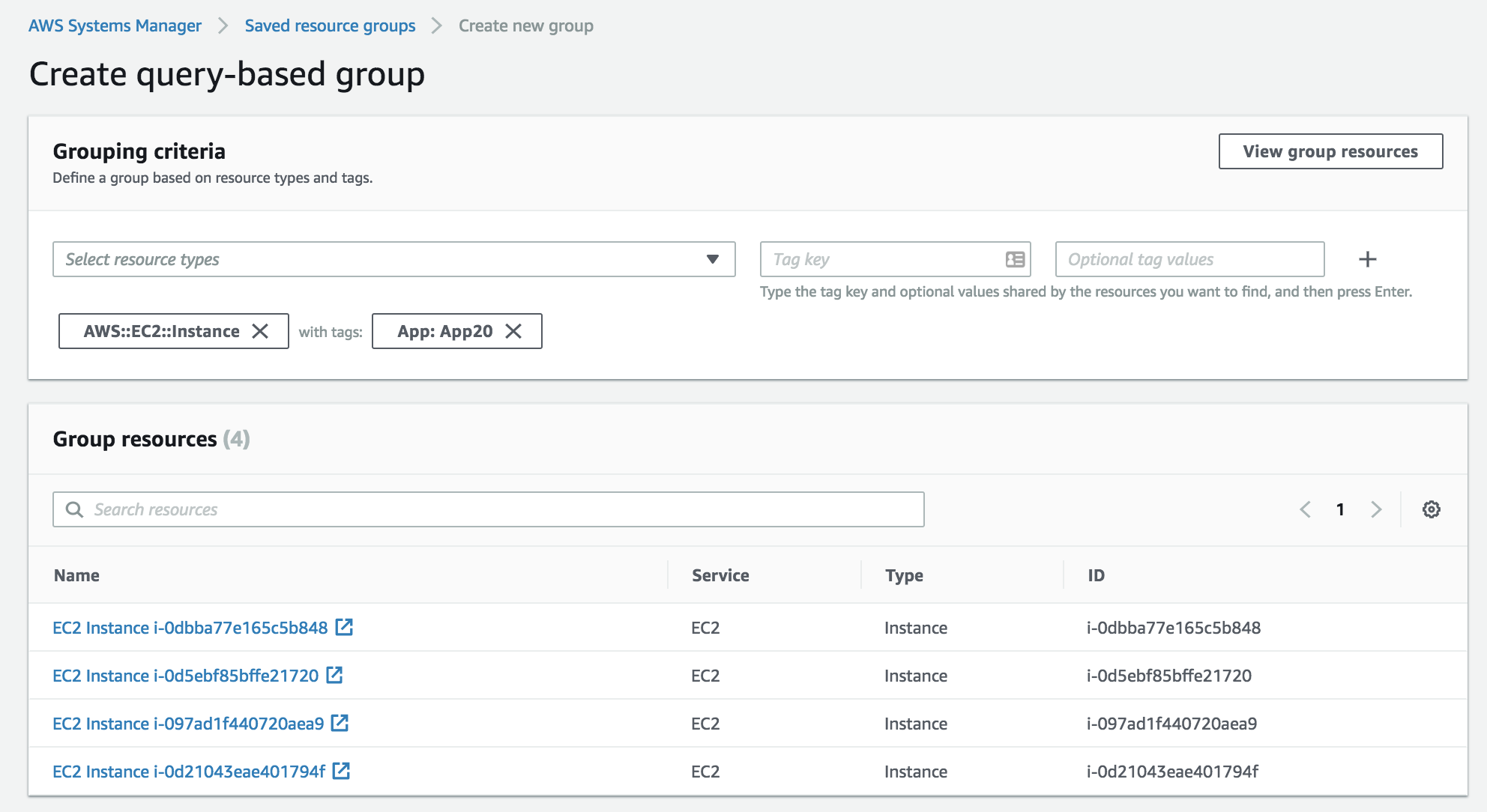 I could also have created this resource group from the AWS CLI, for example:

So, now that we have a resource group in place containing a number of resources, what can we actually do with it? Well, at this point, we can start looking at the other features available within Systems Manager - first up, Insights.

The Insights functionality found Systems Manager is focused primarily on the inventory and compliance within your environment. By clicking on ‘Inventory’ within the Systems Manager console, you can quickly get a view of the managed instances you are running (a managed instance is simply an EC2 instance that has the appropriate software to allow it to be managed by Systems Manager), as well as the operating systems and OS versions, plus the applications running on those instances: 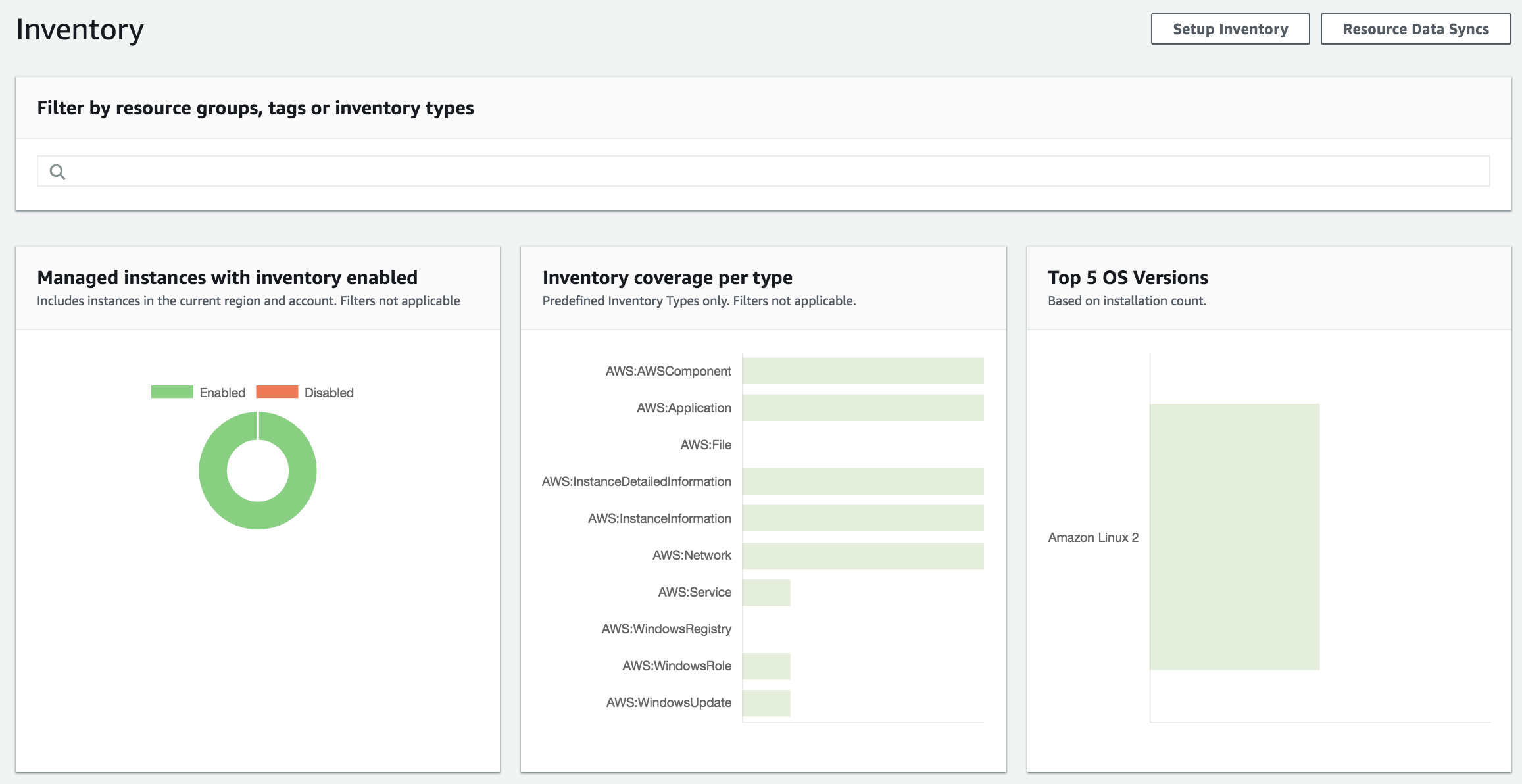 As you can see, it’s possible to filter by resource group or other criteria, such as tags and inventory type. Insights also has a built-in compliance view, which lets you easily look at patch management and configuration rules that you might want to apply to your environment.

SSH’ing into machines is so old hat isn’t it? What if you didn’t have to bother with that and instead had the ability to remotely run commands on your instances? Step forward, Run Command. Here’s an example - I want to run a shell script on each of my managed instances. Rather than using SSH to get into each machine individually and running the script, I can use Run Command to do this instead: 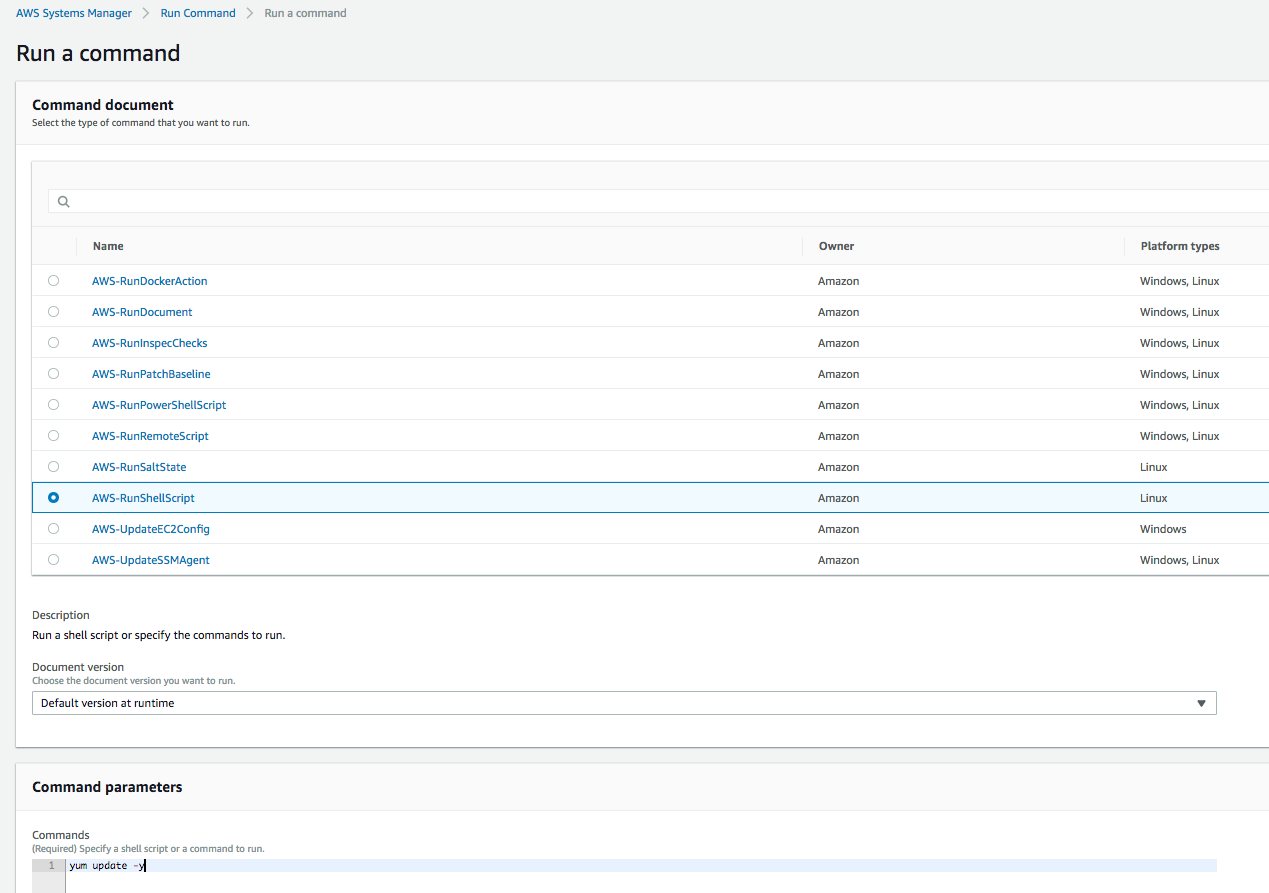 Once I click the ‘Run’ button, the command executes on each instance: 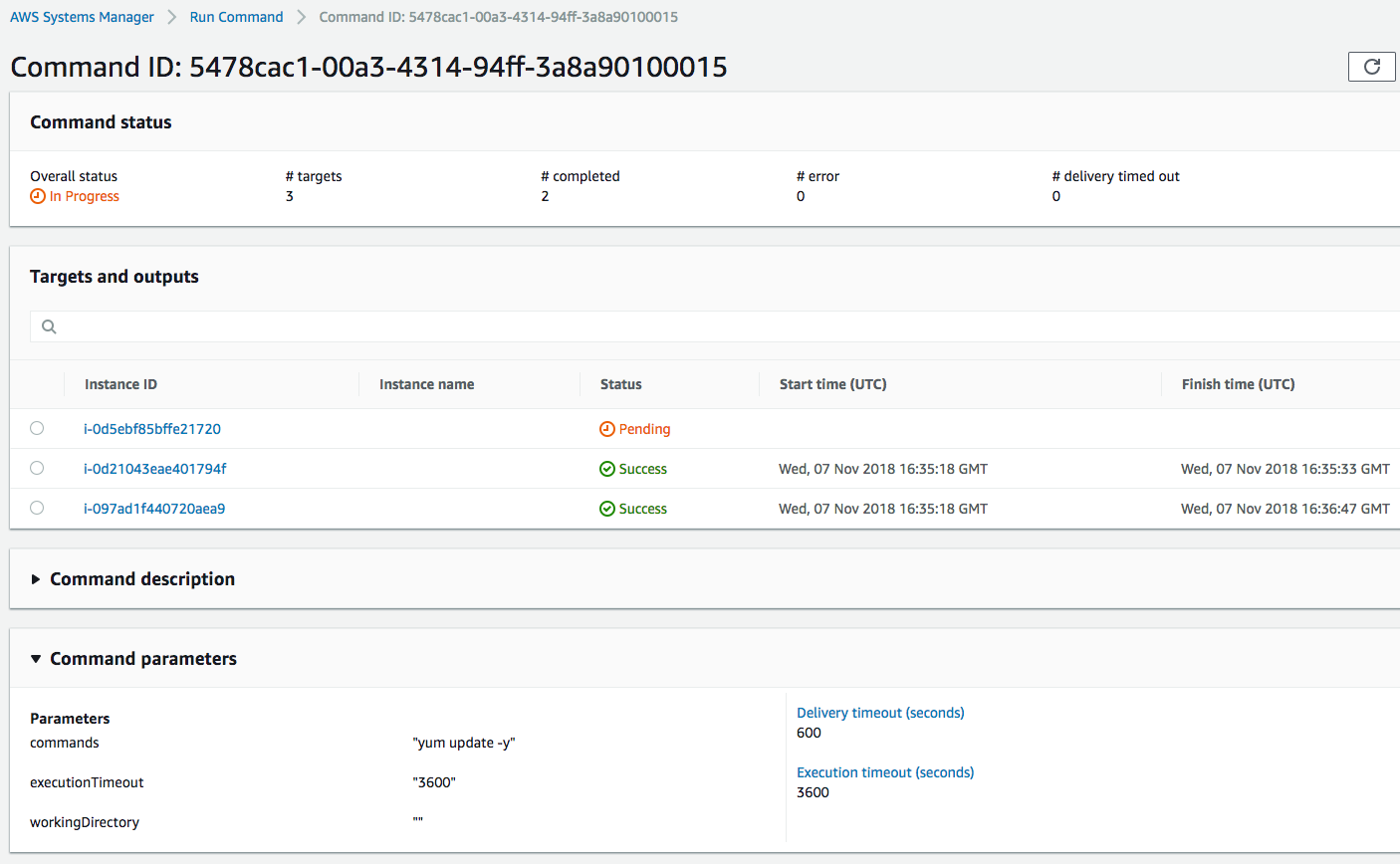 There are a number of other features within Systems Manager that I won’t cover here, including Session Manager (a feature that lets you gain access to the shell of an instance through the browser), Patch Manager and State Manager (allows you to manage the state of your instances, for example anti-virus or firewall settings).

The EC2 instances that you run on AWS include a large number of configuration items and settings - for example:

There are lots of others, but the point is that it would be handy if there was a way to gain access to this information from within the instance itself. This is where Instance Metadata comes in. Let’s see how this works.

In the following example, I’m SSH’d into one of my Linux EC2 instances. To access the metadata for the instance, you simply need to make an HTTP request to a specific end point in the form of http://169.254.169.254/latest/meta-data/. So if for example, I want to know the host name of my instance, I can use the Curl tool to make the request:

Getting the host name isn’t all that interesting, so let’s see if we can get the IP address of my instance:

I can also find the private IP of my instance that is associated with the public IP address above:

OK, that just about wraps it up this post and for EC2. In the next post, we’ll cover one of my favourite topics: networking.