Welcome to part 5 of this blog series - so far I have covered the following topics:

Next on the list, we’ll have a look at some networking concepts within ACI - namely private networks, bridge domains and subnets. Some of these are terms that you might not recognise, so what are they for?

A private network is defined under a tenant, under the ‘Networking’ side menu: 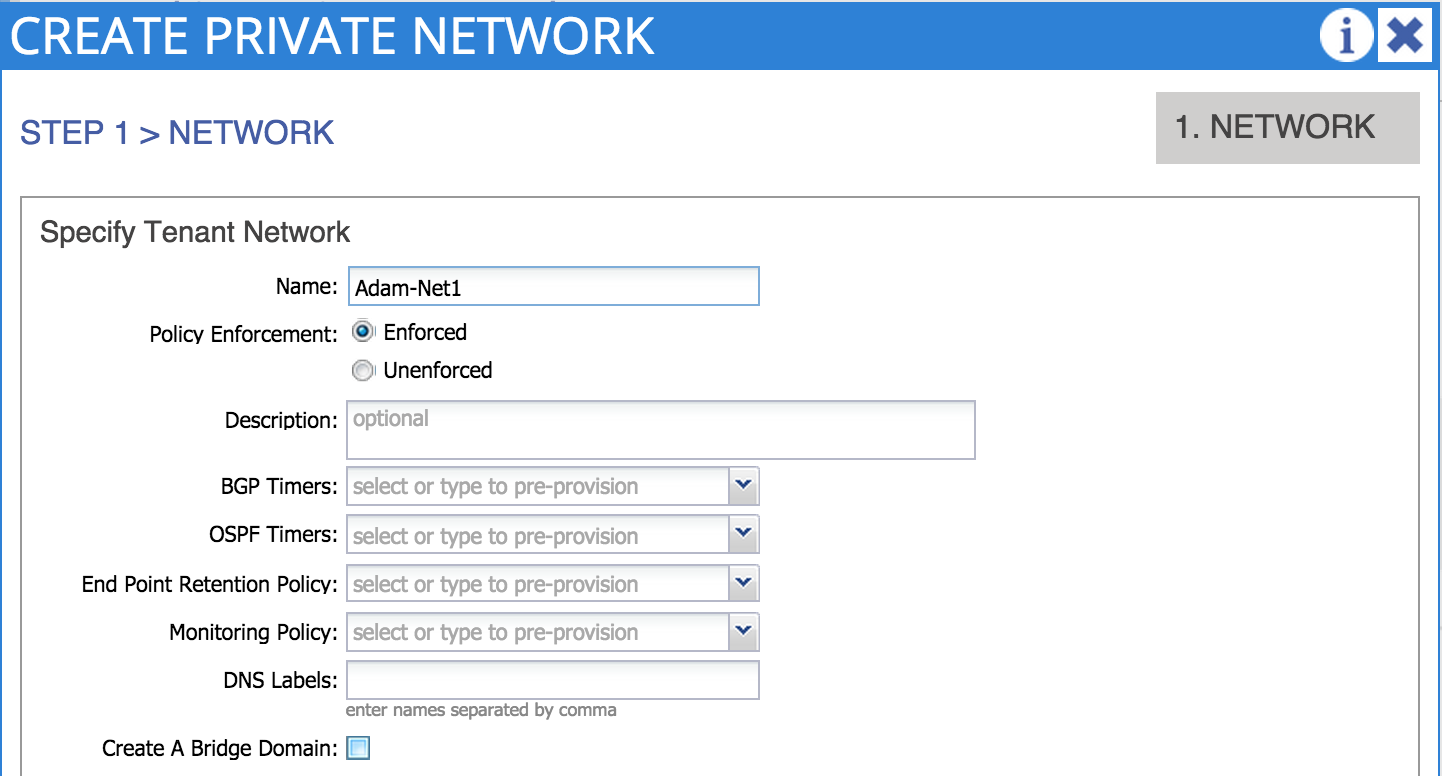 There are a number of policies you can associate with a private network, including OSPF and BGP timers, as well as how long end points should be retained. One interesting option within the private network configuration is the Enforced / Unenforced option. The default option here is ‘Enforced’ - this means that all security rules (contracts) associated with this private network will be enforced. It is however possible to disable this (Unenforced) which means that contracts will not be enforced within this private network. This is like having an ACL with ‘permit any’ at the end of it, which of course means that inter-EPG communication will be allowed without the need for contracts.

Private networks are fairly to easy to understand, so what about bridge domains? A bridge domain is simply a layer 2 forwarding construct within the fabric, used to define a flood domain. You’re probably now thinking “that’s just like a VLAN” - and you’d be right, except that bridge domains are not subject to many of the same limitations as VLANs, such as the 4096 segment limit. In addition, bridge domains have (by default) a number of enhancements such as optimised ARP forwarding and unknown unicast flooding.

When you define a BD (from the same ‘Networking’ side menu we used to define our Private Network), a number of forwarding options are available if you select the ‘custom’ option from the drop down menu:

Let’s look at these options in more detail:

A bridge domain is always associated with a private network - you’ll need to select one when you create the BD.

When you create a bridge domain, you have the option of defining a subnet under the BD:

When you define a subnet under a BD, you are creating an anycast gateway - that is, a gateway address for a subnet that potentially exists on every leaf node (if required). In the traditional world, think of this as an SVI interface that can exist on more than one node with the same address.

You’ll also notice that we can control the scope of the subnet - private, public or shared. These are used as follows:

Hopefully this gives you a good overview of the main networking concepts within ACI - in part 6, I’m going to walk you through creating an access policy - this is a crucial part of attaching hosts and other devices to the fabric.